What a diverse, welcoming, stunning country Botswana is, teeming with wildlife and blessed with abundant water in the North. Access to Maun, the gateway to the North of Botswana is swift and comfortable for international and South African  tourists if one flies from Cape Town or Johannesburg. Within a few hours one can literally be deep in the bush of Northern Botswana, sipping a G&T while elephant, hippo, buffalo, and all sorts of other wildlife pursue their ancient habits undisturbed around you.

Earlier this month I inspected camps for Gondwana Tours & Safaris in the Okavango Delta and the Linyanti. Many of us are familiar with the Okavango Delta, but certainly I knew little about the Linyanti. The name seemed impossibly romantic and remote to me. The Linyanti is in fact a huge “swamp” on the border of Northern Botswana and Namibia’s Caprivi Strip. It is remote, famous for its huge herds of buffalo and elephant. Access by plane to the Linyanti is a 40 minute plane ride North from Maun.

Our first stop however was in the Khwai Concession, a community concession in the heart of the Okavango Delta. A short ‘plane trip from Maun landed us right next to Khwai Village, where the community live in harmony with some of the wildest and most dangerous animals on this planet. As we landed I could see elephants everywhere, grazing peacefully in the green wetlands. We – me and a couple of other agents invited by African Bush Camps – were collected by land cruiser and at once began an informal game drive that left me speechless. Two huge male lions were lying sunning themselves next to the Khwai Bridge while villagers went about their tasks around them, collecting firewood, fishing, and cutting grass for thatch. Then a young male leopard popped up, ignoring us completely as he stealthily stalked a nervous herd of Impala. Amongst this abundance of dangerous game the villagers manage to live and work around the animals, respecting them as they in turn expect respect.

I am told though that an attempt to keep donkeys at Khwai village was unsuccessful.

Khwai Tented Camp, which is run by African Bush Camps, a well known Zimbabwean company with Camps in a number of Southern African countries, was the first Camp to be inspected by us. The Camp is on the banks of the Khwai River in the Okavango Delta in a pretty setting dominated by a luxurious Boma decorated in a colonial style. The Boma overlooks the river. African Bush Camps is well known for their superb service, which in my view is their trademark. Khwai Tented Camp follows this tradition, providing management, staff and guides that are superbly trained and who make a special effort to engage with and please their guests.

The “tents” at Khwai Tented – really most Botswana Camps offer “tents” that are in fact massive luxury apartments – are attractive, luxurious, eclectically furnished, and uniquely offer electrical connections under the beds for sleep apnea machines! We were told this is an increasingly common request. The Camp has a large, super refreshing, deep blue swimming pool for those who prefer not to swim with the crocs and hippos down by the Khwai river. 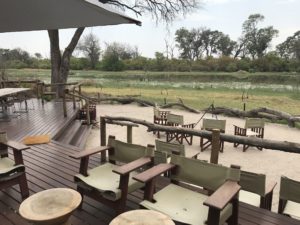 We were offered a morning walk with armed Rangers and all took up the offer with a mixture of excitement and trepidation. I mean really, the Khwai Concession is particularly well know for its prolific cats. We had already seen lion and leopard near the camp. Now we were going to be walking in the same area! Our guides quickly set us at ease though, explaining a little about their training and the rules that we were to follow to ensure our safety. Walk in single file between the Rangers, wear neutral clothing…and whatever you do, don’t run!

We trooped along past a pod of hippos in the river, the hippos complaining loudly about our intrusion. Past the hippos we stopped to inspect spoor, trees, plants and bushes, which flora the guides are well acquainted with. They explained to us a little about the medicinal use of the plants and trees in the area. Then we moved through a small grove of trees, past an elephant mud bath, only to come across two mating lions ahead! Our guides, quietly and professionally settled us. They said that it appeared to them that the lions had finished mating, a process that takes a couple of days. Indeed the lions looked exhausted, and the female didn’t look particularly thrilled at the male’s further half hearted attentions. The lions were directly on our path back to our vehicle so we had to return to the land cruiser along the same path we had originally taken. This meant we had to pass the hippos again. They were still complaining loudly. 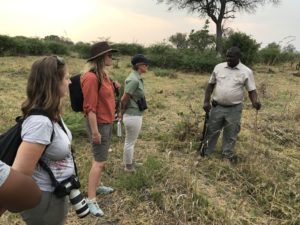 Sadly we had to leave Khwai to head up to The Linyanti. But we had already seen more wildlife than I could have imagined in this relatively small area – elephant, zebra, giraffe, kudu, all sorts of exotic birds, not to mention the many cats –  and we’d been impressed by the standard of service and professionalism of our hosts.

Transport between Camps in Botswana is normally by small ‘plane. Our ‘plane to The Linyanti was bigger than usually but still only perhaps a ten seater, single prop ‘plane with one pilot. We took off from the dirt airstrip at Khwai Village and flew North for about 40 minutes before landing at the remote Saile airstrip in the Linyanti. I always feel nauseous after these small ‘plane flights. Most people do, but the alternative is a very long drive over poor sand tracks. We were met by a representative of African Bush Camps at the airstrip who explained to us that Linyanti meant “Place of Buffalos”. The trip to Linyanti Bush Camp was to take over an hour across deep sandy tracks. We spotted Kudu, Giraffe, Impala, and Ground Hornbill along the way. 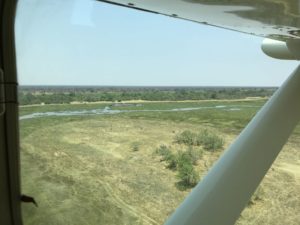 Linyanti Bush Camp is built on a bluff overlooking the Linyanti Swamp. The camp is in a private concession so as a rule there won’t be any traffic jams of safari vehicles and self drivers as is sometimes found in popular public game areas. The camp has a comfortable Boma where guests can relax and eat communally. Below the Boma is a big fire pit where guests have breakfast and congregate after meals. The rooms are big, comfortable, but a little dark. However I suspect that in the heat of summer those dark rooms provide extra and welcome protection from the heat. 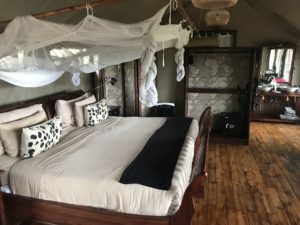 We were soon whisked away from our rooms and the main Boma for a game drive before dinner, surprising a warthog along the way, crouching in the entrance of an Aardvaark hole that he had appropriated. We drove slowly in thick sand down to the banks of the Linyanti where we enjoyed sundowners while elephant drank in the distance. Back at the camp dinner was excellent, not just the mouth watering slow cooked Oxtail but also the company – interesting, diverse guests from all over the world sharing our table. The wines were good South African wines. It always disappoints me when bespoke Southern African Safari Camps neglect their wine lists. It doesn’t make sense to me for them to just provide some arbitrary table wine when they must know that their guests are likely to have a working knowledge of wine – and could have avoided disappointment for a few dollars more. 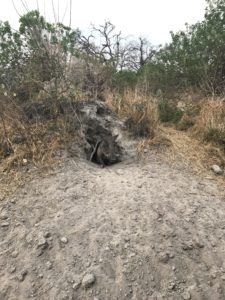 The unique aspect about this camp is their helicopter! They have a dedicated Swedish pilot who flies the helicopter, providing game viewing and scenic flights around the area as well as transfers from and to the airstrip and other camps. This seems to me to be a swift, safe, and comfortable alternative to the small planes and long drives that are typical of transport in the North of Botswana. I have to admit I’d never flown in a helicopter so I was nervous about what I assumed was a highly unstable means of transport. To the contrary I found the ride we did up to the airstrip and back – in less than a quarter of the time it would take to drive – remarkably stable and calm. Below we could watch and film startled giraffe and hippo splashing through the water. Buffalo were abundant. I’d recommend this mode of transport any time! A complimentary helicopter flight is included in the price of a visit to Linyanti Bush Camp, I believe. 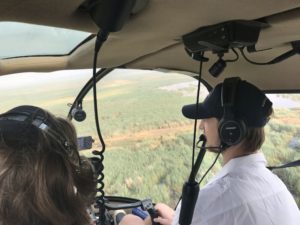 Alas we had to leave for further camp inspections. I would be traveling on alone, back to the Okavango Delta to inspect camps further afield there, while I believe the others were heading for Zambia. On the long and sandy road back to the airstrip we were thrilled to come across a large pack of satiated Wild Dogs lying panting on a sand bank next to the water. We managed to get closer to them and sat in silence, awed by this special sighting. But we needed to catch my plane so we reluctantly moved on, only to run into a huge herd of elephants just around the next bend. Hundreds of elephants with mothers and young, moving swiftly down to the water, squealing excitedly and beginning to run as they got closer. Dust swirled around them as they plunged into and wallowed in the cool swamp. We counted and counted as elephant after elephant moved in front of us. Eventually we gave up as our counting took us into the hundreds.

By now we were late for my flight – but with a good excuse! – held up by elephants – so we raced the last few kilometers to the airstrip. There we found our pilot catching 40 winks, her head resting on the joystick of her aircraft. The Okavango Delta now has many local female pilots who fly superbly. This one was no exception but I had delayed the plane so we set off South at some speed, trying to recover lost time I imagine.

All of the camps mentioned above offer game drives in open land cruisers, guided walking and Mokoro (traditional dugout canoe poling on calm water). The Linyanti camps offer the helicopter too.

I thoroughly enjoyed my couple of days with African Bush Camps (ABC). Gondwana Tours & Safaris often book ABC, not just in Botswana but in Zimbabwe and and Zambia too. Excellent service, superbly trained guides, large well appointed “tents”, and good food and drink are the hallmarks of this company. Gondwana Tours & Safaris have many satisfied clients who can attest to that.