The Namibia Desert in south Western Africa is thought to be Earth’s oldest desert. The Namib-Naukluft National Park is an ecological preserve within the Namibia Desert and within Namibia. The Park is one of the largest wildlife parks in Africa. A surprising collection of creatures survives in the hyper-arid region, including snakes, geckos, unusual insects, hyenas, gemsbok and jackal. More moisture comes in as a fog off the Atlantic Ocean than falls as rain, with the average 106 millimetres of rainfall per year falling during the months of February to April.

The winds that bring in the fog from the Atlantic ocean are also responsible for creating the park’s towering sand dunes, whose burnt orange colour being a sign of their age. The orange color develops over time as iron in the sand is oxidized, like rusty metal. The older the dune, the brighter the colour.

These sand dunes are the tallest in the world, in places rising more than 300 meters (almost 1000 feet) above the desert floor. The dunes taper off near the coast, and lagoons, wetlands, and mudflats located along the shore attract hundreds of thousands of birds.

‘Namib’ means open space and the Namib Desert gave its name to form Namibia – “land of open spaces”. The park was established in 1907 when the German Colonial Administration proclaimed the area between the Swakop River and the Kuiseb River a game reserve. The park's present boundaries were established in 1978 by the merging of the Namib Desert Park, the Naukluft Mountain Zebra Park and parts of Diamond Area one and some other bits of surrounding government land.

The Park has some of the most unusual wildlife and nature reserves in the world, and covers an area larger than many countries. The region is characterised by high, isolated inselbergs and kopjes (the Afrikaans term for rocky outcrops), made up of dramatic blood red granites, rich in feldspars and sandstone. The easternmost part of the Park covers the Naukluft Mountains. 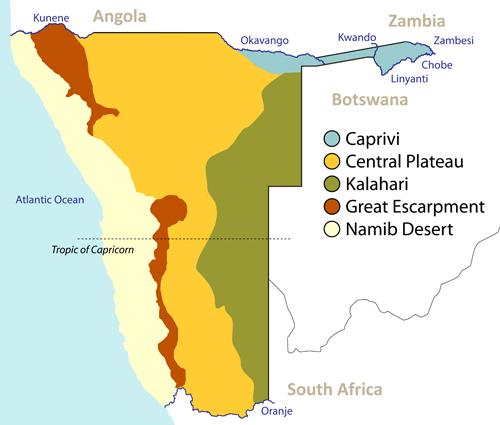