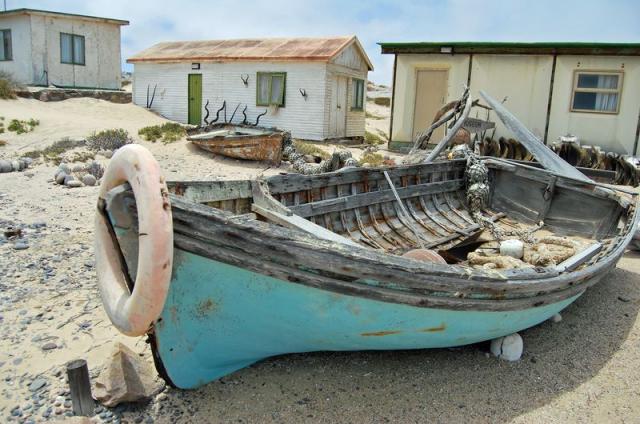 The Skeleton Coast is the northern part of the Atlantic Ocean coast of Namibia stretching south of Angola from the Kunene River down to the Swakop River, although the name is sometimes used to describe the entire Namib Desert coast. The Bushmen of the Namibian interior called the region "The Land God Made in Anger", while Portuguese sailors once referred to it as "The Gates of the bad place".

On the coast the upwelling of the cold Benguela current gives rise to dense ocean fogs (called "cassimbo" by the Angolans) for much of the year. The winds blow from land to sea, rainfall rarely exceeds 10 millimetres (0.39 in) annually and the climate is inhospitable. There is a constant, heavy surf on the beaches. In the days before motor-powered boats it was possible to get ashore through the surf but impossible to launch from the shore. The only way out was by going through a marsh hundreds of miles long which is only accessible through a hot and arid desert.

The Skeleton Coast is named for the bleached whale and seal bones which covered the shore when the whaling industry was still active, as well as the skeletal shipwrecks caused by rocks offshore that were hidden in the fog. More than a thousand vessels of various sizes and in different areas litter the coast. Notable wrecks in the region include the Eduard Bohlen, the Otavi, the Dunedin Star, and the Tong Taw.

The coast is generally soft sand, occasionally relieved by rocky outcrops. The southern section consists of gravel plains, while north of Terrace Bay the landscape is dominated by high sand dunes. Past human occupation by Strandlopers is shown by shell middens of white mussels found along parts of the Skeleton Coast.

Namibia has declared the 16,000 km² (6,200 mi²) Skeleton Coast National Park over much of the area, from the Ugab River to the Kunene. The northern half of the park is a designated wilderness area. Notable features here are the clay castles of the Hoarisib, the Agate Mountain salt pans and the large seal colony at Cape Fria. The remainder of the coast is the National West Coast Recreation Area.

The coast has been the subject of a number of wildlife documentaries, particularly about adaptations to extreme aridity. Many of the plant and insect species of the sand dune systems depend for their moisture on the thick sea fogs which engulf the coast and windblown detritus from the interior as food. The desert bird assemblages have been studied in terms of their thermoregulation, coloration, breeding strategies and nomadism.

The riverbeds further inland are home to baboons, giraffe, lions, black rhinoceros, and springbok. The animals get most of their water from wells dug by the baboons or elephants.