Livingstone is the capital of the Southern Province of the Republic of Zambia, situated on the Zambezi, very near to Victoria Falls.

Livingstone was founded in 1904, when the Victoria Falls Bridge was completed. It was named after David Livingstone and during 1911-35 was the capital of Northern Rhodesia. Livingstone remained the only city in Zambia after independence with the same name. It has about 110,000 inhabitants (2005) and is adjacent to the Mosi oa Tunya National Park.

Livingstone has good road and rail links to the south (Zimbabwe), west (Trans Caprivi Highway) and north (Lusaka, Copperbelt). The city is strongly based on tourism as it is the starting point for tours to the Victoria Falls. Livingstone also benefits from many offers of operators on the Zimbabwean side of the Victoria Falls, such as bungee jumping from the railway bridge and white water rafting. Since the deterioration of conditions in Zimbabwe, there is a boom of tourism in Livingstone at the expense of Victoria Falls.

The Livingstone Museum, which was founded in 1930, exhibits archaeological finds from Ingombe Ilede, which date from the time of the Munhumutapa Empire. 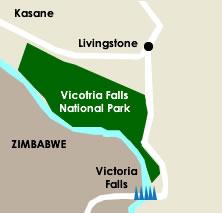