Hwange National Park is, at 14,651 km2, the largest National Park in Zimbabwe. The Park is located to the west of Zimbabwe in the foothills of the Kalahari near the Botswana border and 200 km north-west of Bulawayo. Hwange National Park, which is home to a dense population of animals, is one of the most important protected areas in the country.

The area served as a hunting ground for King Mzilikazi in the 19th Century. In 1928 the area was turned into a protected wildlife reserve by the British colonial administration. In 1930 the Park was awarded the status of a National Park and named after a local tribal leader. The National Park lies between the transition areas of the Kalahari Desert in the southwest and the humid savanna in the north-east. The altitude ranges from 938 meters to 1152 meters, which means it can get wet and cold in winter. About two-thirds of the area is occupied by sandy soils, with dry dunes and river valleys running to the southwest. The annual rainfall is about 655 mm although rainfall in the southwest tends to be lower. The rain falls mainly in the months of November through to March and quickly evaporates. The waters are often only temporary as it evaporates quickly forming saltpans. The hottest temperatures will be just before the rainy season in October. June and July are the coldest months with temperatures near freezing point. The vegetation changes with the rainfall from the arid southwest to the more densely forested northeast.

Elephant herds in particular form a significant proportion of the Park's wildlife. Their population has increased steadily over the years and their current number is estimated to be some 30,000-40,000 elephant. Whilst seeing elephant in this number is certainly a spectacular sight there is no doubt that they have caused extensive damage to the vegetation in the park!

To sustain the wildlife in the dry season, 62 artificial water sources have been drilled. Nonetheless, Hwange National Park has a natural feel to it. 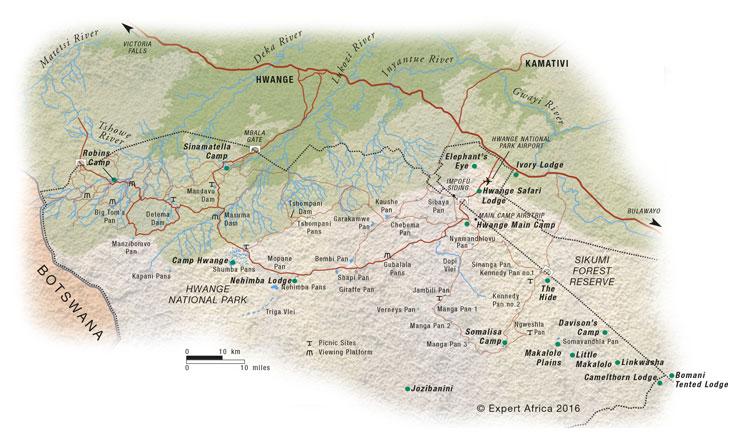