Gondwana Tours and Safaris was founded in 2008 in Botswana, with the head office currently based in Maun and a satellite office in Berlin and London. We specialize in tailor made safari itineraries around the Southern, Central and Eastern African Regions. All the places and countries we offer, have been visited and explored thoroughly by ourselves and we can offer first hand knowledge.

We prefer to offer small and intimate places, off the beaten “mainstream tourism” track , which also encourages local employment, community benefit and profit to the country’s income in the most positive way in wild places.

We aim at a mid range to upper end market and can communicate to our customers in five different languages. (Spanish, German, French, Afrikaans and English).

Steffi was born in Berlin, Germany and discovered her passion for travelling and Africa in young years and has over 20 years of experience working in the tourism sector. In her early 20´s  she lived and worked in East Africa, as a dive instructor. Later, she worked out of  the Carribbean, UK and Namibia as a specialized travel agent for some major safari and tour companies. In 2008 she settled in Botswana, where she decided to open Gondwana Tours and Safaris.

Mark was born and grew up in Southern England. He got the travel bug when, after graduating from university in 1990 as a law student, he went to live and work in New Zealand for 2 years. Since then he has travelled extensively in Africa, Asia and Australasia. He has worked for over ten years in the travel industry in the UK and has considerable experience in designing complex tailor made holidays. In 2011, after nearly 4 years working in London as a Senior Tour Consultant for one of the most prestigious travel companies in the world, he decided to swap big city life for the open spaces of Africa and joined Steffi in Maun as a co-director of Gondwana Tours & Safaris. 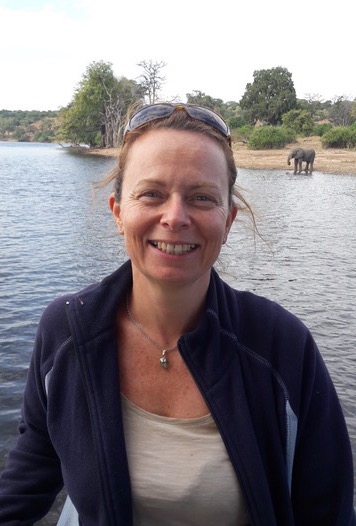 Christelle was born and bred in France. Her love for traveling and exploring the world started during her last year of university when she moved to the UK to graduate there. She has since lived in many different countries all around the globe. In 2005, after many years working in the IT industry, she decided to take a break from the corporate world and backpacked through Southern Africa for an entire year. She ended up settling in Botswana in 2006 for a number of years and lives in Portugal at present. Over the past 10 years, Christelle has been involved in the management of many lodges throughout Africa and elsewhere (Botswana: Khwai River Lodge, Eagle Island Lodge, Savute Elephant Camp, Meno-A-Kwena Camp, The Old Bridge Backpacker, Tanzania: Emayani Beach Lodge and Tulia Beach Lodge, Congo (DRC): Ngaga Camp, Fiji: Navutu Stars Resort). Christelle joined Gondwana Tours & Safaris as a Senior Travel Consultant in 2019.

Jen started in the travel business after school as an IATA travel agent in her home town where she grew up in Harare, Zimbabwe. Her life in travel has included running a rafting company and booking office in Victoria Falls, managing five star lodges for Wilderness Safaris, and working for African Horseback Safaris in the Okavango Delta. Jen has lived in and been selling Safaris in Botswana for the last 15 years. She runs her own horse trails business there, as well as working full time for Gondwana Tours and Safaris. Jen’s passion for wildlife and animals in general has always been a core principle of her life. In 2014 Jen established the Maun chapter for Global March for Elephants and Rhinos, a worldwide annual event to raise awareness on poaching in Africa. Jen lives in Maun with her horses, 5 border collies, and Iggy Pop, the king of rescue dogs.

Jonathan was born in England but moved to Africa as a child, where he developed a deep love for and understanding of the African Bush and its wildlife. He has a legal background and practised for many years as an attorney in South Africa. Midlife led him to a complete change of career, which took the form of inspecting and reviewing Safari Camps in Southern and East Africa for Gondwana Tours and Safaris. Jonathan’s travels and research for us have seen him visit and review Safari Camps, Lodges, and Hotels in Namibia, Botswana, Zimbabwe, Tanzania, Uganda and Ethiopia. When not inspecting and reviewing Camps and Lodges Jonathan works for Gondwana Tours and Safaris as a Senior Travel Consultant.

Gondwana is represented on SafariBookings.com