Kaokoland (now called Kaokoveld) is a 50,000 square kilometre region in the dry north-west of Namibia. It borders on the west to the Skeleton Coast, in the north to Angola - the Kunene (Epupa Falls), then Ruacana in the east to the former Ovamboland (now Omusati region), and in the south down to Damaraland. With less than 350 mm annual rainfall there is no agriculture possible in Kaokoland. The Himba and Herero who live here, live as traditional hunter-gatherer or ranchers.

Kaokoland is known for its consistent anti-poaching efforts as well as for its unique wildlife population, in particular their rhino population that is improving in number, and their desert-adapted elephant. Giraffe and a good population of endemic bird species are also to be found here. It is still uncertain whether the desert -adapted elephant found in this area are a separate subspecies or a sedentary group of African elephant that have been in this area for decades or longer. What we do know is that their behaviour is different in many ways from that of their African counterparts living in the Savannas. The inaccessibility of this area on the one hand, and the fight against poaching on the other, has led to a steady increase in the elephant population in the Kaokoveld.

The transport and roads are poorly developed here. To drive away from the few developed areas can only be done with a 4x4 vehicle and preferably with GPS navigation. The Van Zyl-Pass is considered the "high school" for 4x4 drivers and is only to be attempted by expert drivers. A relatively simple route leads from the Okongwati to the Epupa Falls. But because this stretch can mostly only be taken crawling with a maximum speed of 20-30 km/h, you will be able to appreciate the unique world of the Himba (fetching water from natural sources, looking after their cattle, open campfires, moving along the road, or trying to catch a lift with you!).

One of the highlights of the Kaokoveld is the harsh and remote landscape of the region. Besides that, a visit to the Epupa Falls, the Ovahimba Living Museum and other traditional villages, a visit to the Skeleton Coast, and searching for desert elephant and desert lion are all worthwhile when visiting this amazing region. 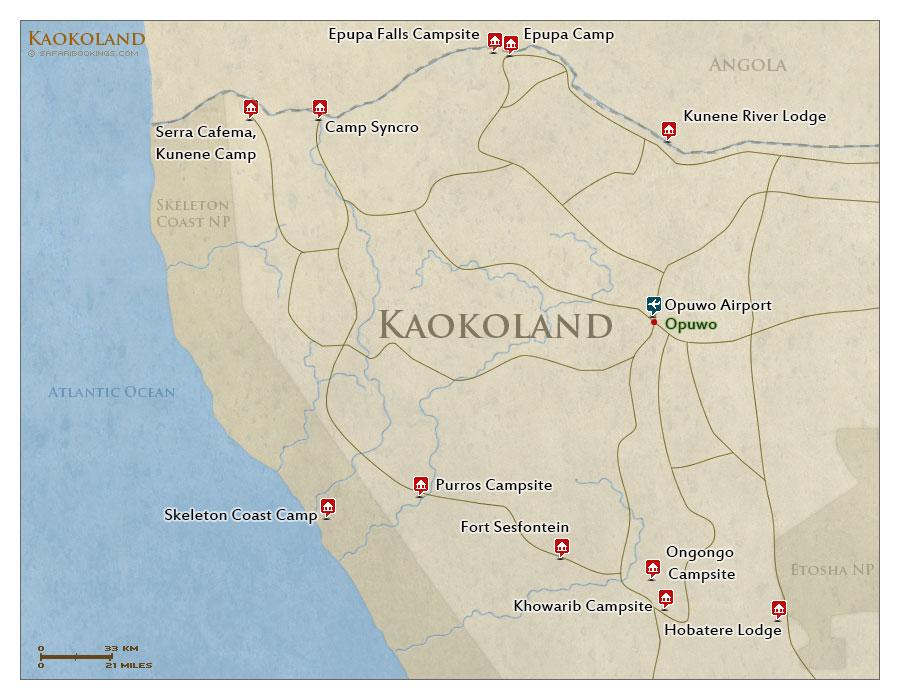