The Lower Zambezi National Park gets its stunning scenery from the combination of 120km of Zambezi River front, the concentration of wildlife in the valley floor and the backdrop of the magnificent Zambezi Escarpment, the Southern limit of the Great East African Rift Valley. The Park is opposite Mana Pools National Park, a World Heritage Site across the Zambezi River in Zimbabwe.

Relatively new, the Lower Zambezi National Park was officially gazetted in 1983 and consists of over 4000km2. The park is bordered by the Chiawa Game Management Area (GMA) in the West, Rufunsa GMA in the East, the Zambezi River in the South, and the Great East Road in the North. 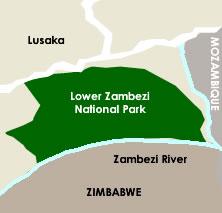