Kafue National Park is the largest national park in Zambia, covering an area of about 22,400 km² (similar in size to Wales or Massachusetts). It is the second largest park in Africa and is home to over 55 different species of animals. The park is named for the Kafue River. Kafue National Park was established in 1924 after the British colonial government moved the traditional owners of the area, the Nkoya. Most of the park lies in the Central Zambezian Miombo woodlands eco-region characterised by savanna grasslands with Miombo tree species, growing thickly in some patches, with a few small dambos (grasslands which become marshy in the rainy season) interspersed among them. In the south there are stony hills and rocky outcrops where the sparser Zambezian and Mopane woodlands eco region takes over, and Mopane trees adapted to hotter drier conditions replace Miombo. The jewel in Kafue's crown however is the Zambezian flooded grasslands eco region in the north, including the Busanga Swamp and plains. These support large herds of herbivores and their predators. In the dry season the animals keep close to the swamps and marshy creeks and are easily seen. The area is also noted for its birdlife.

Ngoma in the south is the headquarters of the park but this area together with the Nanzhila Plains are less visited and have become somewhat run down since the Itezhi-Tezhi Dam was built and more lodges were developed in the north. The reservoir cuts the north-south track through the park and now it is necessary to detour outside the park to drive between Ngoma and Chunga. This park is considered for inclusion in the 5 Nation Kavango - Zambezi Transfrontier Conservation Area. 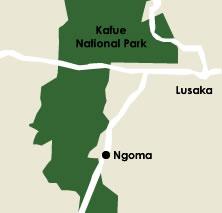