Called by some as one of the greatest wildlife sanctuaries in the world, South Luangwa is one of Zambia's main draws. This 9,050-sq km park is centered around the Luangwa River and is home to one of Africa's largest concentrations of wildlife. Thanks to its inaccessible location, South Luangwa manages to combine immense density of wildlife with limited visitor numbers, and it's also one of the few national parks that allow night safaris. However, visitor numbers are steadily marching upwards, and the best time to visit is right now — before it becomes the next Kruger or Serengeti.

South Luangwa is dry woodland, watered by the meandering Luangwa River and its many oxbow lakes. The dominant tree is the mopane, but stately baobabs also dot the landscape here and there. In the dry season, most plants and trees seem to shrivel up and wildlife congregates around watering holes, allowing excellent viewing.

South Luangwa is home to a dazzling array of wildlife. You will see hippos and crocodiles as soon as you cross the bridge over the Luangwa River, and elephants are hard to miss along the river's banks. Thornicroft's giraffe, with white legs and faces, and Crawshay's zebra, without the brownish "shadow-stripe" of common (Burchell's) zebra, are both endemic to the park and easily spotted. Herds of buffalo roam the park, along with several prides of lions. The density of leopards is among the highest in the world, although spotting these nocturnal creatures can be tricky. All sorts of antelopes abound: impala are ubiquitous, the puku — rarely seen outside Zambia — is almost as common and there are plenty of waterbucks and bushbucks too.

South Luangwa is a dream come true for birdwatchers, with over 400 species recorded. Depending on who you ask, the best times to go are November-December (when the rains start), April-May (when they end) or August-September (when the water levels are at their lowest).

The peak travel season is May to October. May to August it's still pleasantly cool and dry. September and October are very hot and the humidity is building up, but these are the best months to spot the game as they gather close to the river and watering holes. November to December is hot and humid and January to April is the rainy (or "green") season, some lodges close during this period, others give reduced rates. The rainy season is the best time to go birdwatching. From March to June is the best time to spot the elusive African wild dog. 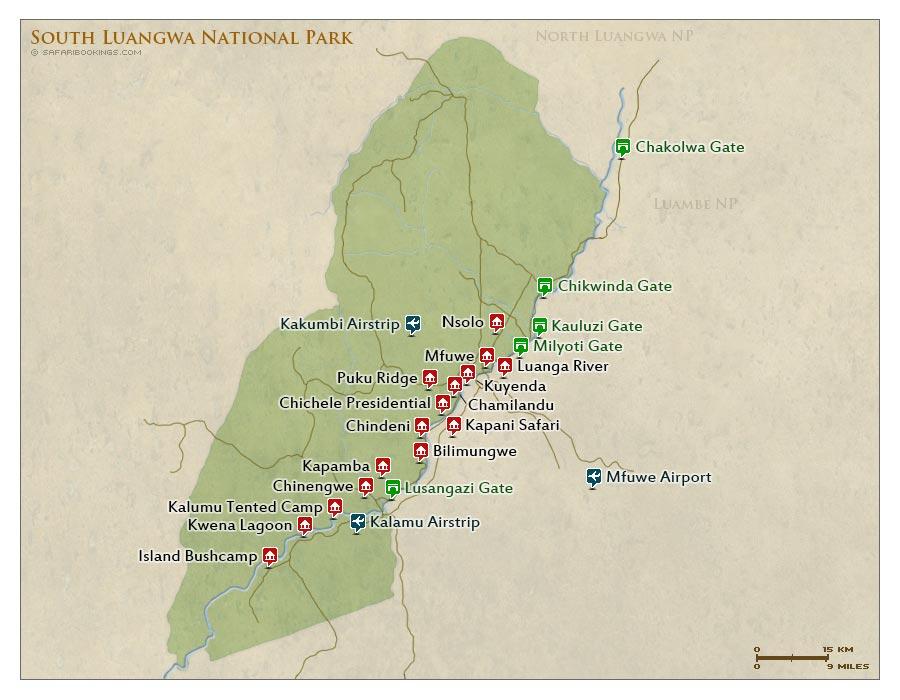